Bringing back The Golden Mile in Belfast

Like our fellow BIDs up and down the country, we’ve been hard at work bringing visitors and shoppers back into our city centre since the pandemic. One of our flagship projects last summer was launching the Golden Mile.

It includes 20 attractions that people can visit — starting at the iconic Belfast City Hall, a 19th Century Victorian building with a museum as well as the famous Titanic Memorial Garden. The mile-long trail is bookended with the Ulster Museum, our main city museum, which captures a lot of our unique Irish history including the Troubles.  In between those two so-called  “hero attractions”, there is a swathe of interesting places to see such as the Grand Opera House, the Ulster Hall, where Led Zeppelin first performed Stairway to Heaven, and the Empire Music Hall. And on top of all of that, visitors can enjoy beautiful green spaces, sculpture and heritage.

The Golden Mile was originally the main hospitality hotspot for Belfast, it was just outside the City Centre, and that’s where people went for a meal and a dance during the civil conflict of the 80s and 90s. When peace came to Belfast in the late 90s, all of that hospitality gravitated into the city centre, and of course there was no Business Improvement District at the time to champion the original area, and it ended up run down and derelict.

We’ve been leading this project with Visit Belfast and the local council, showing just what can be achieved when we work together. We wanted to build on that sense of history and identity, and reinvent the concept of the Golden Mile so it embraces arts and culture as well as hospitality. It encourages people to leave their cars at home and explore our city on foot, and importantly, spend their money with our businesses.

Listen to the mini-conversation with Chris McCracken from Linen Quarter BID on The British BIDs Podcast wherever you find your podcasts or at: https://anchor.fm/british-bids/episodes/The-Golden-Mile-with-Linen-Quarter-BID-e1hkj27 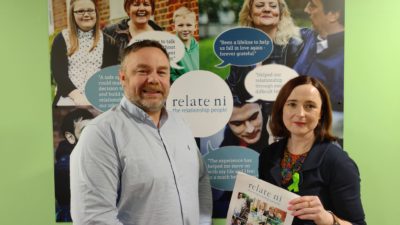